Alfred Purssell is Gertrude Purssell’s (Lady O’B) father.  He is one of nine children of Roger Purssell and Charlotte Peachey as shown 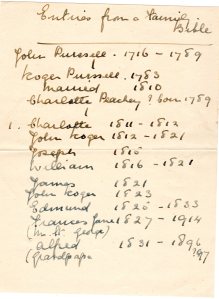 by this copy from a family bible. Alfred himself had seven children. Five girls and two boys

The Purssells were variously described as confectioners, bakers, tea importers, and by 1871, Alfred described himself as a wine merchant. In the census in 1881, he is living in Clapham as a widower, with five servants. (a housekeeper, cook, housemaid, parlourmaid, and a children’s maid.)

Alfred was also a member of the Court of Common Council in the City for many years. He was a Trustee of the Bridge House Estates, who were responsible for building Tower Bridge  as shown on the

plaque on the north side of the bridge.

As part of the initial search for who was who in the photos, I also traced this print in the London Metropolitan  Archives, which confirmed that our picture was Alfred.

Mr. Purssell served for many years as a member of the Court of Common Council for the Ward of Cornhill, of which the present Lord Mayor is Alderman. If memory serves, he was Chairman of the Bridge House Estate Committee when the Tower Bridge was opened.

Not quite true; he was on the committee, but not the chairman. But he was at the opening ceremony.

I am enormously grateful to Christine Carver (who is a Purssell cousin) for her help in identifying these photos. She wrote this back in June 2015.

“I have an enormous pile of photos of the family given to me by my father I got him to write names on the back but  a lot of them are badly faded. However I have managed to identify yours. With help from papers given to me by his sisters Noella mentioned in the letter from Ursula, and Awdry who did a great deal of research without help from the Internet ! Ursula was the 3rd daughter of Laura Mary Clare who was Alfred’s eldest  daughter by his first wife.Ursula was born 1894 and died 1974, not married. Laura Mary Clare was married to Max Winstanley.”

Back to your photos:

The young man with folded arms was Alfred  Joseph eldest son of Alfred, born 1867,  died1931. He was a stone mason and imported  large quantities of Italian Marble which was sold for various  buildings in London, including Brompton Oratory .He had a partner in his business Wilfred McEvoy.

The young lady with her hair tied back and dark, gathered sleeves is Charlotte, younger sister to Alfred J.  born 1869 married to Wilfred Parker 1898. I also think it is her with  the bridesmaids present around her neck?

The one with the hat and high collar is Agnes born 1871 married Edmund Bellord 1890.

And the other two ,the lady with the comb in her hair and the one covered in forget-me-nots are Lady O B.

In addition, I am very grateful to Nicholas Bellord (Agnes’s grandson) for the following additions.

My guess at this one

is that it is Frank Purssell with his sisters, rather than Alfred. 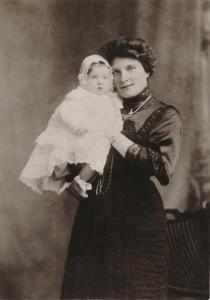 Then there are two of Agnes with her son Charles 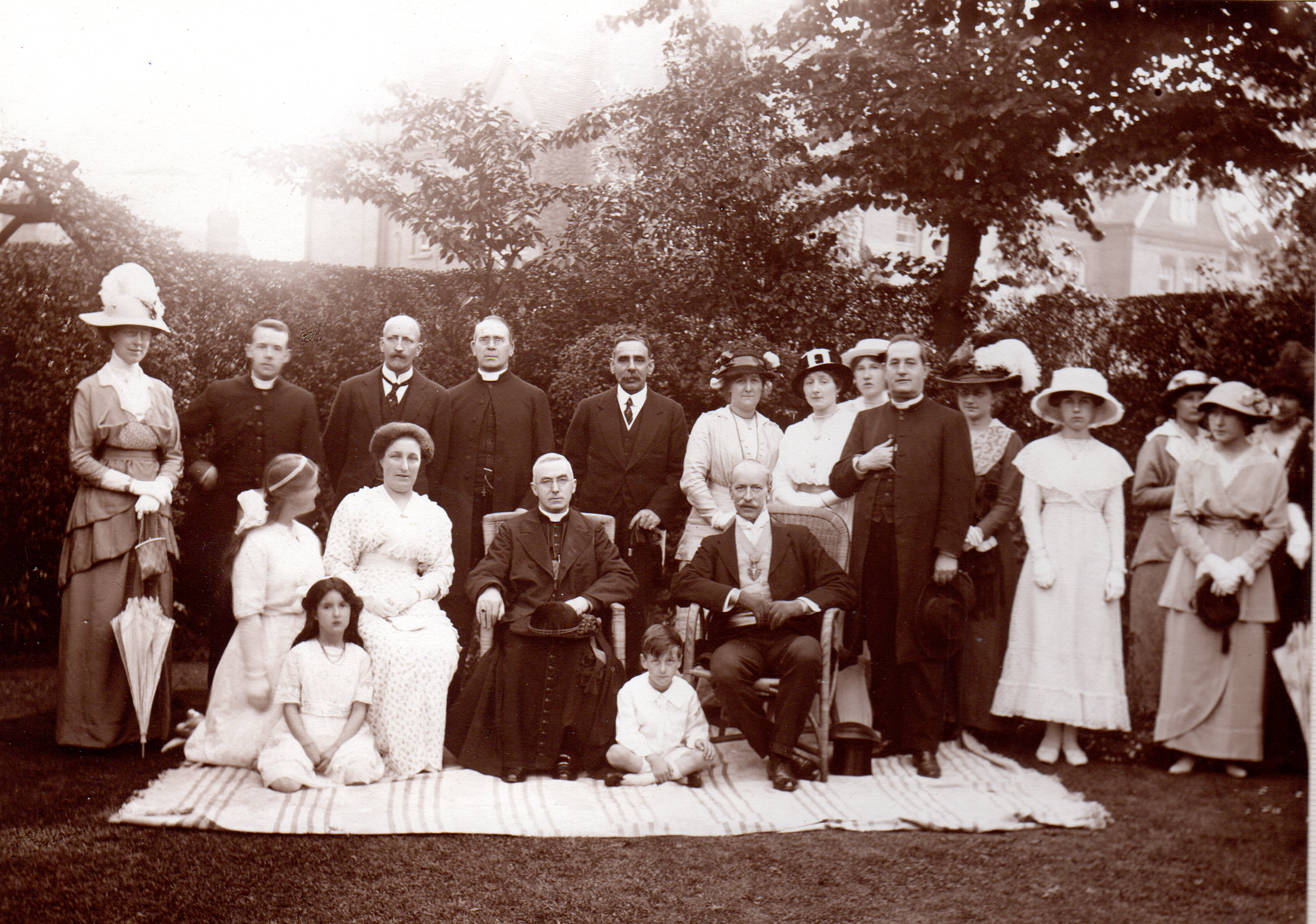 This was almost the first thing I searched on. We sort of knew that he had been Mayor of Hampstead, but not that it had been throughout the First War. In fact, from 1913 until his death in 1919 (six terms in total). He is easily identified in the garden party photo sitting next to the Cardinal. The decoration he’s wearing is a bit odd, and I suspect it’s possibly a papal decoration. He was granted a knighthood, but died before being done; but Lady OB was given the title anyway.

The next thing I found was this obituary.

We regret to record the death of Alderman Ernest A. O’Bryen, Mayor of Hampstead, which took place on Saturday night, at the age of fifty-three years, following on an operation from which he at first seemed to be progressing favourably. Educated at Stonyhurst and Cooper’s Hill, he spent some ten years in the Indian Forest Service in Upper Burmah, shortly after its annexation. He retired from the service in 1897 and married in the following year, Gertrude, daughter of the late Alfred Pursell. In 1913 he was elected Mayor of Hampstead, first Catholic to hold that position, and held it till his death. In 1916 he was President of the Stonyhurst Association and the same year was elected a Vice-President of the London Circle of the Catenian Association. During the war he took a leading part in making arrangements for the feeding and accommodation of Belgian refugees, and he also organised and equipped hospitals for the British Red Cross and St. John Ambulance. In 1915, Alderman O’Bryen was instrumental in raising the 183rd Howitzer Brigade and the 138th and 139th Heavy Batteries of Royal Garrison Artillery.

This helped a lot. Working on an obvious hunch that everyone named is a close relation, and a bit of digging, we have the soon-to-be Lady OB with her four sisters and two brothers, two brother-in-laws, and it appears the wife of a brother-in-law.  All eminently Googleable.

And not a difficult step to get to Dr John Roche O’Bryen, his father………..