This is seventeen days before Alfred’s death on the 5th May 1897, and about six weeks before Frank’s wedding a month later on the 6th June. 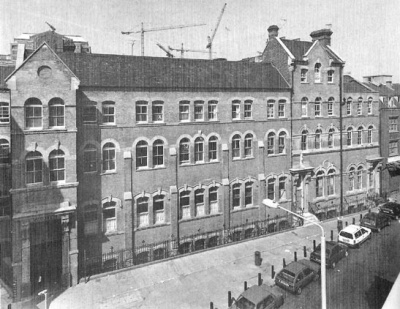 PROVIDENCE (Row) NIGHT REFUGE AND HOME.—On Easter Sunday at the Providence (Row) Night Refuge and Home, Crispin Street, Spitalfields, E., in accordance with the custom of the late Mgr. Gilbert, a special dinner, consisting of hot soup, meat, potatoes, and bread, was provided for the inmates, who numbered over 300. In the absence of the Hon. Manager, Mr. Alfred Purssell, through illness, his son, Mr. F. W. Purssell, presided, and was supported by the Rev. M. Fitzpatrick, the Misses Purssell, Miss B. G. Munk, Mr. and Mrs. Secrett, Mr. J. W. Gilbert (Secretary) &c.

In the men’s refectory, Mr. F. W. Purssell gave a short address. He said that they came there on behalf of the Hon. Manager and the committee to bid the inmates welcome to the refuge. Whilst deeply regretting the misfortune which had forced them to accept its hospitality, he trusted that it might be the means of reinstating them in life. Although it was very hard to be poor, poverty was not necessarily a disgrace. The refuge had been established by the late Mgr. Gilbert to help the deserving poor, and his work was still being continued. There was every prospect this year of a revival in trade owing to the many public celebrations which were to take place, and he (Mr. Purssell) hoped that when Easter came round next year, all the inmates present would have homes of their own. In conclusion, he announced that the Rev. Mother would give each inmate sixpence as an Easter gift on leaving the refuge next morning. Three ringing cheers for the Rev. Mother and the Sisters of Mercy, and for Mr. Purssell were followed by dinner, which was served by the Sisters. The visitors then proceeded to the women’s room and to the servants’ homes, in each of which Mr. Purssell addressed a few kindly words to those present. During the course of the afternoon oranges were distributed, and additional fare was given at the tea in the evening. Altogether the poor people had a very enjoyable day, and the Sisters and visitors must have been gratified at the joy and happiness to which they by their help contributed.

The above text was found on p.36, 24th April 1897 in “The Tablet: The International Catholic News Weekly.” Reproduced with kind permission of the Publisher. The Tablet can be found at http://www.thetablet.co.uk .