CHAPTER III. – This is 1815. On Saturday 24th June, six days after the Battle of Waterloo Joshua Walmsley and Adeline Mulleneux got married at St. James’ church in Toxteth. He was twenty-one years old, she was nineteen. It’s not quite the romantic tale uncle Hugh tells us below. As can be seen from the marriage register, it was a conventional marriage, the banns would have been read aloud on three Sundays before the wedding ceremony, and not a rush straight to the church to find a vicar to marry them instantly. This is however a chapter that contains almost all the detail about any sort of personal life.

When Joshua Walmsley obtained the long-wished-for post, he had a stronger incentive to push his fortune than the remembrance of his father’s prognostics — the only woman he had ever loved had promised to become his wife. We can dwell but lightly on the details of this story of a love that began in childhood, and endured to the last day of a long and eventful life.

” When I was seven years old,” he says, ” I met at a dancing-school Adeline Mulleneux, aged six. She was the daughter of a wealthy wine merchant. I remember we noticed each other the first day of my arrival. Soon after I was allowed to escort her home from the dancing-school, and very proud I felt to be her protector. We played together in the old court, and we loved each other. A story is still told how a portrait of Adeline, as a baby, was shown to me. It represented her sitting in her mother’s lap, grasping three enormous cherries in her tiny fingers.  “Do you like it?’ asked Mrs, Mulleneux. After gazing solemnly at it for a long time, it is related that I answered: ‘Yes, but I like herself much better.’  The family bantered little Adeline on the conquest she had made ; but we were soon separated, for the state of my father’s affairs obliged him to send his children into the country. Years elapsed, and we met again at Mr. Knowles’ school Adeline Mulleneux, who was now eighteen, came there to take drawing lessons, and as I was the principal teacher, we met. Once more we became intimate, and once more we loved each other. When I took my seat on the high stool in Mr. Carter’s office, with a salary of forty pounds [present-day value about £35,000], and a prospect of seventy [present-day value about £75,000] in four years, she had promised to become my wife when I should be in somewhat more prosperous circumstances.”

” I now took a modest lodging at Edge Hill, and resolved to live upon one shilling a day [That works out to £18,5s. per year which would have a present-day value about £16,500]. Bread and milk for breakfast, a penny roll and a basin of soup were my daily bill of fare. My duties were those that fall to apprentices in a large establishment — the post- office, petty cash, and the copying of letters. I thought the time must still be very far off when I could walk into Mr. Mulleneux’s house and ask the rich merchant to give me his daughter. But I had her promise and knew it was steadfast enough to stand any test, and for my part, above all other prizes, my mind was set to win this one.”

Here then we find the young man in possession of the long-coveted berth in a merchant’s office. The old days with their irksome duties have passed away, leaving only wholesome traces of their hard discipline. His new duties were subordinate, and could train him to be only an ordinary clerk, and in this routine he might have remained for years, but he determined to make himself of special value to his employers. His natural energy spurred him on ; and then there was, too, that secret incentive, that goal which he kept ever in view, and which, sooner than he thought, was to crown the runner with victory. Thus he tells how he set about acquiring a knowledge of grain, which was the qualification of most value in the office of Messrs. Carter and Piers : —

” Old Peter Evans was their warehouseman. He was a practical man of the old school, and liked to see a lad eager to learn, and when I questioned him about samples of grain he answered readily. Peter was willing to teach me all he knew. Twice a week before breakfast, and long before my appointed hour for work, he and I used to meet and go together to the stores and ships. The old man would take samples and show them to me. The number and variety of grain at first bewildered me. It seemed a hopeless task trying to learn to distinguish them all. But perseverance conquered in the end. Peter now began to take pride in a pupil who was mastering the mysteries and intricacies of grain. He grew ingenious in devices to puzzle me, till at last I was a match for all his resources. Then he would take a handful of every sort of grain and pulse — English, Irish, Scotch, foreign — and spreading them before me, ask the quality, weight, and condition of each ; of what county, province, and country they were, with such observations as the case required. All the while he watched me from under his shaggy eyebrows, and would give a satisfied growl when the answer proved correct.”

” Peter prided himself on possessing a knowledge of grain beyond anyone in Liverpool, and I was on the way of becoming as great an adept as himself. No one knew of these early meetings in the stores and ships, and my employers wondered at my sharpness. Customers also soon discovered my proficiency, and sometimes consulted me in preference to old Peter.”

” Scarcely had I been a year in Mr. Carter’s service when the traveller and salesman, Mr. Robinson, a very able man, gave notice, on his entering into partnership with one of the leading merchants of Liverpool. This was a serious loss, and Mr. Carter, puzzled how to fill up the vacancy, consulted his retiring salesman. Mr. Robinson pointed me out as the man best fitted to fill the post. Accordingly it was offered to me, but no mention was made of an increase of salary, although my predecessor’s had been a large one. Morally speaking, however, the rise was a great one, and I closed with the offer at once.”

The year 1815 was a memorable one for England and Liverpool. Peace with America was restored. On a brilliant spring morning in April, the British flag flying at her mainmast, the American at her mizen peak, the Mild sailed up the Mersey — the first American vessel, come on a peaceful enterprise, that had entered the port for nearly three years. Some months later came news of Waterloo and of Bonaparte’s final downfall. But the year was to be marked for the young man by an event, more important to himself personally than the vast changes which were gradually being effected.

Mr. [Hugh] Mulleneux refused to sanction his daughter’s engagement. The wealthy merchant had more ambitious views for his child than a marriage with a poor clerk with no apparent prospects ; but the lovers were not to be deterred by such considerations. They were willing to wait, but determined to be faithful to one another. According to the ordinary course of events, there could hardly be a more unrealisable romance than was theirs. Any jury of wise men would have given a unanimous verdict against the marriage. A poor clerk, with a salary of fifty pounds per annum, and a prospect of seventy pounds, whose compulsory economy amounted to extreme privation, offering himself to a lady of position and expectations, with no other plea than that she loved him.  Family prejudices and family prudence had to yield to it, nevertheless, and it was not the modest lover who precipitated the crisis. They met one day and spoke to each other in presence of Mr. Mulleneux. That afternoon, Mr. Walmsley received a note bidding him attend next morning at the office of Mr. Mulleneux’s eldest son[also called Hugh]. Never did a day of more perplexing foreboding break upon the course of true love, for the note was couched in terms that showed some decision was pending.

The account of that interview and its result we give in Mr. Walmsley’s words :

” I went at the appointed hour with a beating heart : what new turn of affairs did this meeting bode? In a corner of the room Adeline sat, brightening the dingy office to me. Young Mulleneux’s expression was very stern as he looked at me, and, pointing to his sister, said :

‘ Are you prepared to marry this lady?’

The question was meant for a clincher. The thought of my poverty rushed full upon me ; but there was no sign of fear in Adeline’s face.

” But when, sir ? ‘ asked my interlocutor derisively.

‘ At once,’ I replied quietly.

“ Perhaps I had better send for a coach ? ‘ said young Mr. Mulleneux ironically.

‘ We can walk,’ I answered undauntedly, going up to my betrothed. There was no faltering in the hand she laid upon my arm. To St. James’ Church we accordingly walked ; but none of the necessary preliminaries had been gone through, and the clergyman refused to perform the ceremony. We made an appointment to be at church the next morning at half-past ten.

Matters having reached this pass, Mr. Mulleneux made no further opposition. ‘ Let them marry,’  he said, ‘ but I will never see them again.’ 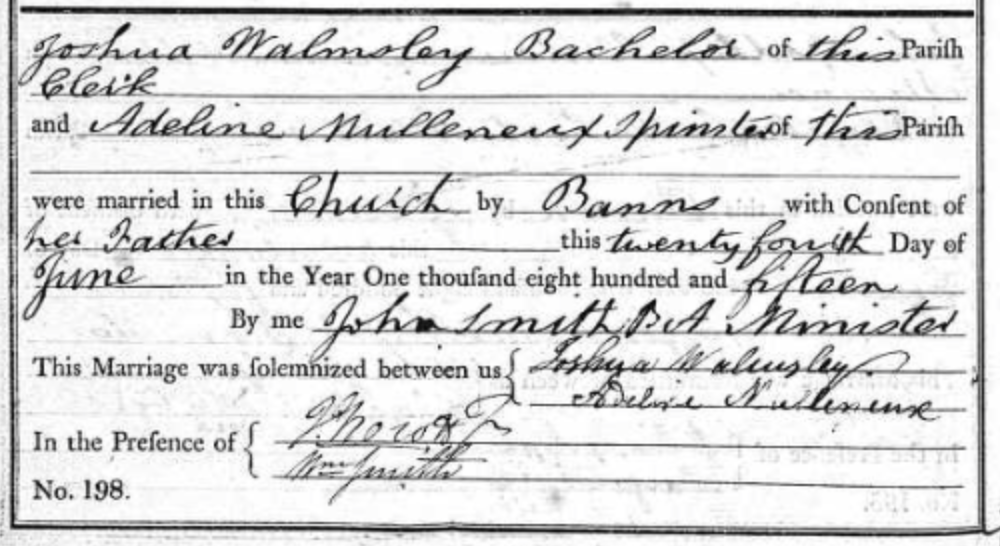 At half-past ten next morning we met at the altar. The ceremony was performed. Adeline Mulleneux and I plighted our troths to each other. Then we parted ; I to return to my work, my wife to go to the house of friends, but not to her home.

” On my entering the office, Mr. Carter’s greeting showed he knew the reason of my late arrival. ‘Are you aware of the cost of living ? ‘ he asked me with a grim smile.  I knew the cost well ; and, although I was supremely happy, I was not without misgivings.”