Aghada  Hall was, apparently, a large  Georgian house designed by the Cork architect  Abraham Hargrave (1755-1808); though it seems to be “a comfortable gentleman’s residence rather than a vast mansion.” It was completed in 1808. John Roche was also responsible for the start of the Aghada National School in 1819.

It’s time to revise this post quite a lot, and I am extremely grateful for a Thackwell grandson for the photos of the house. For the purposes of clarity, I’m going to call it Aghada Hall. John Roche, (17??- 1829) who had it built referred to it as Aghada House, but it was later referred to as Aghada Hall. Tony Harpur, a local historian in Cork sent me the following:

In the 1911 Irish census, Aghada Hall  was described as a first class house with 9 windows in the front, and 8 rooms occupied by the family, and 15 outbuildings. Edwin (or Edward – he used both) Penrose-Thackwell was also listed as the owner of a two room cottages, one three room, and one four room cottage, nearby.

The estate seems to be a substantial working farm. The main house had two stables, a coach house, harness room; three cow houses, a calf house, and a dairy. It also had a piggery, fowl house, boiling house, barn, shed, and a store.

Fifty-four year old Edwin was living in the main house with a substantial staff, Thomas and Lavinia Buckley, who were married, were the butler, and housemaid respectively. They also had fifty-five year old Mary Flynn, the cook, and a dairymaid, parlourmaid, and kitchenmaid, all in their twenties.

In addition, to the main house, James Scanlon the gardener (48) and his wife were in the two room cottage. Ernest Jones (32), and his wife Gertrude (30) and their eight year old son were in the four room cottage, along with Gertrude’s twenty-five year old sister. Ernest was the chauffeur, and Ernie and Gertie had been married 11 years.  Finally, there were eight members of the Murphy family in the three room cottage. Edmond Murphy and his wife with three daughters, and three sons. All four men, Edmond (50), Denis (22), Edmond (16), and Patrick (15) are general labourers, presumably working on the estate.

John Roche who built the house,  “amassed great wealth during the French wars”, according to “Barrymore Records of the Barrys of County Cork”  published in 1902. He was Ernest O’Bryen’s great grandfather, and made quite significant efforts to establish some sort of Roche dynasty to maintain the family name, and the house that he had built for himself.

There were three significant beneficiaries of John Roche’s will of 1826, with a later codicil. They were his nephews James Joseph Roche, and William Roche; they seem to be cousins rather than brothers. The third main beneficiary was John Roche’s eldest grandson, John Roche O’Bryen. The total estate amounted to about £ 30,000 when John Roche died in 1829, the modern day equivalent of £45,720,000.00.

The house and land was left to James, and his male heirs, first of all, and then William, who also inherited £ 10,000, “in case of his not coming into possession of the estate by the means before-mentioned,  I leave him  £6,000″ plus John’s grand-daughter, Jane O’Brien’s ……  £4,000 £4 per cent. stock ;” . Jane O’Bryen, John Roche’s granddaughter was married to his nephew William Roche, and their daughter Pauline Roche inherited their share as a one year old orphan. The final third was John Roche O’Bryen’s  £ 10,000, presumably in the expectation that a male Roche heir would inherit the house and land.

John Roche O’Bryen,  and Jane O’Bryen were Catholic. All their  five remaining younger siblings were Church of Ireland. JROB and Jane/William Roche are the only O’Bryen beneficiaries of John Roche’s estate. The O’Bryen siblings are John Roche’s only grandchildren.

John Roche also left  a series of £ 100 legacies (present-day £ 150,000)  to various sisters, and nephews and nieces, and “To the parish of Aghada, I leave the school-house, and £20 ( £ 30,000) a-year for its support, and also the chapel and priest’s house  I leave to the parish rent-free for ever, as long as they shall be used for such qualified purposes ; the five slate houses I built in the village, I leave to five of the poorest families rent free ; to David Coughlan I leave the house he now lives in during his life ; to my servant, James Tracy   I leave the house his wife now lives in;  and to my wife’s servant, Mary Ahearne, otherwise Finne, her house rent-free during their lives ; and to each of those three, viz.,David Coughlan, James Tracy, and Mary Ahearne,  otherwise Finne, I leave £10 (£15,000) a-year during their lives :”

The estate, and the provisions of John Roche’s will were part of a court case, and appeal in 1848, and 1849. (Hillary Term 1848, Mary O’Brien v James Roche and William Roche…lands of Aghada [Mitchelstown Cork]… and Roche v. O’Brien —Feb. 1, 2. 1849) following the death of James Joseph Roche in 1847.  William Roche had died in 1836, and James Joseph Roche, and his family were living there until James’s death in 1847. The house appeared to have briefly in the possession of Henry Hewitt O’Bryen Junior, one of the younger O’Bryen siblings in the early 1850’s.

The house and land were sold in July 1853 in the Encumbered Estates Court, as part of the estates of James Joseph Roche, and William Roche, with Mary (Maria Josepha)  and Eleanor Roche listed as owners, and Pauline Roche as ex parte.  [The Encumbered Estates’ Court was established  to facilitate the sale of Irish estates whose owners were unable to meet their obligations. It was given authority to sell estates on application from either the owner or an encumbrancer (somebody who had a claim on it) and, after the sale, distribute the proceeds among the creditors, granting clear title to the new owners.]  The house was bought by Major General Sir Joseph Lucas Thackwell in 1853, and remained in the Thackwell family until at least 1911. Henry Hewitt O’Bryen does still seem to be a significant landowner in the area, so may well have kept some of the land. 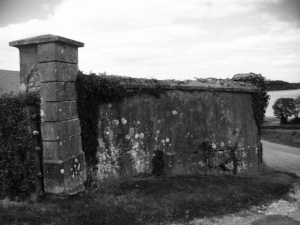 Most traces of Aghada Hall seem to have disappeared, apart from signs of a walled garden, half  an entrance and a small gatehouse.  The old sheds and stables have apparently been converted into houses.

Major General Sir Joseph Lucas  Thackwell had married Maria Audriah Roche (from the Trabolgan branch of the Roche family) in 1825. She was the eldest daughter of Francis Roche of Rochemount, County Cork (an uncle of Edmond Roche, 1st Baron Fermoy). This, incidentally, made Maria Thackwell, a first cousin, five-times removed of Diana, Princess of Wales. They had four sons and three daughters.  She should not to be confused with Maria Josepha Roche, who was James Joseph Roche’s daughter, and one of the parties to the 1848/9 court cases.

In a final twist, The Cork Examiner,reported on the 25th January 1860, having picked up the story from the Illustrated London News that:

“The will of the late celebrated General Sir Joseph Thackwell, G.C.B., has just been proved. By a codicil, dated the day before his death, he deprives his eldest son, Captain (Edward Joseph) Thackwell, the author of the “Second Sikh War, in 184-89,” [sic] and now a barrister at law, of all the property left him in a former will, including Aghada Hall, Cork, and Conneragh House, Waterford, and gives it to trustees in trust for his grandchildren, who must be educated in the tenets of the Protestant religion. Captain Thackwell had been received into the Roman Catholic Church only a short time previous to Sir Joseph’s decease.”

There seem to have been about nine grandchildren; all either the children of Edward Joseph Thackwell (1827, d. 1903), or his younger brother Major-General William de Wilton Roche Thackwell (1834–1910).  Edward Joseph’s son, Lt.-Col. Joseph Edward Lucas Thackwell (1853-1886) had four sons, and one daughter, who seemed to be the major beneficiaries, or users of the Irish houses. His son Walter Joseph de Rupe Thackwell was described as “now of Aghada,” in Burke’s Landed Gentry in 1894, and a younger son Captain Edward Hillyar Roche Thackwell, was living at the house in Waterford in 1911.

However Major William de Wilton Roche Thackwell (1834-1910), and his wife Charlotte Tomkinson seem to have lived in Aghada Hall, at least some of the time until 1894. Their eldest daughter Katherine Harriet Thackwell (1866 – 1950) married Col. Edward (or Edwin) Rawdon Penrose  in 1891, and they celebrated their wedding there. Katherine, and Edward added Thackwell to the family surname by 1911, most probably after the death of Katherine’s father in 1910, becoming Penrose-Thackwell from then on.

The only significant grandchild not to have a notable link to the house is William WR’s  only son Edward Francis Thackwell (1868 -1935) but that was most probably because he had married Kitty Pope-Hennessy on Feb 3 1894 at Rostellan Castle in Cork. She was a forty-four year old widow, and he was twenty six. He was a year older than her eldest son who died young, and three, and seven, years older than his step-sons.

It was probably a Catholic wedding, thus excluding Edward from the provisions of his grandfather’s will, but the pain may have been slightly ameliorated by his wife’s thirty room castle, with the sixty one outbuildings, including  seventeen stables, three coach houses, two harness rooms, and twenty cow houses. All of two and a half miles from Aghada Hall.

It is still not entirely clear when the house was demolished.

Aghada  House was, apparently, a large  Georgian house designed by the Cork architect  Abraham Hargrave (1755-1808), and built for John Roche  (Ernest O’Bryen’s great grandfather) . It was completed in 1808. John Roche was also responsible for the start of the Aghada National School in 1819. John Roche appears to have left his house to his nephews, James Joseph Roche, and William Roche, who were, I think, cousins rather than brothers. William Roche died in 1836, and James Joseph and his family were living there until James’s death in 1847.

The house and land were sold in July 1853 in the Encumbered Estates Court, as part of the estates of Joseph Roche, and William Roche, with Mary (Maria Josepha)  and Eleanor Roche listed as owners, and Pauline Roche as ex parte.

Most traces of Aghada Hall House seem to have disappeared, apart from signs of a walled garden, half  an entrance and a small gatehouse.  The old sheds and stables have been converted into houses.

The house appeared to have briefly in the possession of Henry Hewitt O’Bryen, and was then bought by Major General Sir Joseph Lucas Thackwell in 1853.  Thackwell had married Maria Audriah Roche (from the Trabolgan branch of the Roche family) in 1825. She was the eldest daughter of Francis Roche of Rochemount, County Cork (an uncle of Edmond Roche, 1st Baron Fermoy). They had four sons and three daughters.  She should not to be confused with Maria Josepha Roche, who was James Joseph Roche’s daughter, and one of the parties to the 1848/9 court cases.

The house was left to their son Major William de Wilton Roche Thackwell (1834-1910). He married Charlotte (daughter of Rev. Tomkinson).  William R. Thackwell lived in Aghada Hall house until 1894.Their eldest daughter Katherine Harriet Thackwell married Col. Edward Rawdon Penrose who in 1891 changed his surname by Royal Licence to Thackwell.  There is an account of their wedding on the Housetorian website.

It is still not entirely clear when the house was demolished.