Every so often an exceptional character leaps out, Grant William Edwardes (1830 – 1877) is one of those characters. He turned up just by chance, and he gives every impression of being a very bad boy.

Grant was born in London in 1830, and baptised in St Martin in the Fields in September that year. In Pallot’s Baptism Index, his parents are listed as John and Ann, and John’s profession is given as “gent”. In his brother Alfred Edmund Edwardes’ entry two years earlier, John Edwardes describes himself as a merchant,  and the family are ascribed to the parish of St Paul, Convent Garden, a five minute walk away. St Martin in the Fields church had existed in its current form for just over a hundred years by that time. But Trafalgar Square had yet to be laid out, and the National Gallery hadn’t been built.

Their parents were John Mortimer William Edwardes who was born in Pembrokeshire in 1804, and Ann Wills who had been born into a Baptist family in Cornwall in 1798. They had married in London on the eleventh of October 1827 at St George’s Bloomsbury. Alfred, their eldest son, was baptised five months later on the 16th March 1828.

The Edwardes family seem to have been at one time landed gentry in Wales, and John Edwardes’ great-uncle Francis had been the M.P. for Haverfordwest, and his first cousin once-removed, William Edwardes succeeded his father as M.P. for Haverfordwest, and was later became Baron Kensington, rather oddly as an Irish peerage. He had also inherited his maternal grandfather’s estates which included a large chunk of present day Kensington, including Holland House. So, technically, a junior branch of the Edwardes family, Francis Edwardes’s family had done very well from a good marriage.

Back to Grant’s parents, they don’t seem to be hugely prosperous, but they’re not the struggling poor either. In 1851, John and Ann Edwardes are at 22 Edward Street in Marylebone. Beyond Wells Street, the eastern portion of present-day Mortimer Street W.1 was originally developed as Charles Street, part of the Berners estate, and named after the landowner William Berners’s son and heir. The Middlesex Hospital was built there in 1755–7, house-building following on from 1759. Rather more importantly, Edward Street was at the northern end of Newman Street, Oxford Street being the southern end, and by the mid-1850’s the British and Foreign Marble Galleries of Edwardes, Edwardes & Co were at 17 Newman Street.

Grant Edwardes seems to slip under the radar rather between his birth, and a legal notice in the London Gazette on the 5th August 1862 was the first major clue about him. 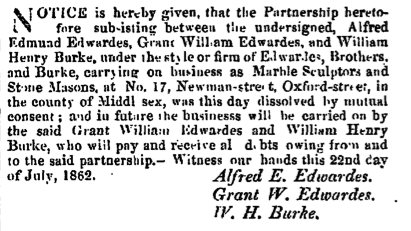 Where he next re-surfaces is startling. On the 31st May 1855, he gets married in Bathurst, in The Gambia, on the west coast of Africa. He is twenty-one, almost twenty-two years old, his bride Rosette Lloyd who was born in 1840, was probably only just sixteen. Neither gave their age on the licence, and neither of their father’s names, or professions were recorded. A Francis Lloyd was one of the witnesses, so one can assume some sort of family consent.

Grant married in an Anglican ceremony, and his elder brother Alfred Edmund Edwardes married the following year, 1856, at the Church of the Most Holy Trinity, in Brook Green in Hammersmith in a Catholic wedding ceremony.

Grant and Rosette’s marriage did not go well, and on Christmas Eve, 1864, Francis Kearsey, a City solicitor filed her petition for divorce. He was thirty-three, and she was only twenty-four. Her grounds for the divorce were cruelty, and Grant committing adultery throughout the marriage. Rosette got her decree absolute on the 9th November 1865.

Grant re-married three months after his divorce on the 8th February 1866 at St Mary’s, Paddington. He was thirty-five, his bride, Elizabeth Ponsford was twenty one.

The whole marriage seems peculiar. Elizabeth Ponsford appears to be quite respectable. Her father William, is described on the register as a “builder”, which is sort of what he described himself in the 1851 census, where he says he is a “proprietor of houses (builder out of business)”. At her brother Thomas’s marriage in 1860, William Ponsford is described as an “architect”. In 1851, the Ponsford family were living at East Lodge, in Acton. The family had three house servants, and East Lodge also had a separate gate house where the coachman/gardener lived with his family. At that point Acton was a village outside London, and comprised about 135 houses. By 1861, the family were in Sheffield Terrace, just off Kensington Church Street, where Ann Ponsford described herself as a “land proprietor”, and both her daughters Mary, and Elizabeth were described as “ladies”. William Ponsford seems to be dead. All the female members of the Ponsford family are describing themselves as “annuitants” in 1871.

So, a respectable bride, and a bridegroom who seems to be the reverse. Every detail of the marriage says something’s wrong. Every other entry on that page of the parish register is a marriage completed after the banns have been read three times in the church. Grant and Elizabeth’s marriage is by licence. Every other entry to the parish register is a marriage conducted by the vicar or curate at St Mary’s, Paddington. Grant and Elizabeth’s marriage is by a former chaplain of the Gold Coast, Africa. Grant and Elizabeth also appear to be rather grander than the vast majority of the people being married at St Mary’s Paddington.

The choice of church is also strange. St Mary’s, Paddington is about two miles away from Elizabeth Ponsonby’s family home, the much more obvious choice would have been St Mary Abbots, the local parish church, which is only half a mile away. But given that Grant and Rosette had lived at various times during their marriage in Aubrey Road, and Brunswick Gardens, the former 700 yards, and the latter 350 yards away from the Ponsford family home, perhaps the risk of getting married in St Mary Abbots was too great

The next significant problem is that Grant Edwardes calls himself a widower, but presumably this is the only way he could get married. Is it legal? I doubt it. Were the Ponsfords aware the Grant was a divorcé, almost certainly not. William Ponsford junior, Elizabeth’s brother was one of the witnesses

Grant and Elizabeth next appear in the 1871 census living at 83 Landsdowne Road in north Kensington. Grant is described as a “wine and spirit broker”. Six years later, they are to be found in Campden Hill Gardens, about a quarter of a mile away from Elizabeth’s family in Sheffield Terrace. Grant dies there on 3rd January 1877, aged forty-seven. He didn’t leave a vast fortune leaving Elizabeth just £ 450 [present-day value £325,000].  Elizabeth remained a widow for nearly forty years, dying in Brighton in 1916. She left £ 4,731 [present-day value £1.8m].

Rosette Edwardes reverted to her maiden name, and in 1871 was living in Woburn Place between Tavistock Square, and Russell Square, and just round the corner from the British Museum. She described herself as a widow aged just 31.