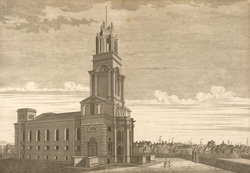 They are Lady O’B’s grandparents.

Charlotte was born on the 19th January 1791 in Limehouse, and christened at St Anne’s church on the 13th February that year. Her Parents are listed as William and Frances Peachey.

Roger was also born in Limehouse, and christened at St Anne’s church on 31 Jul 1783; his parents were Roger and Grace Purssell.

Roger was sufficiently prosperous to be listed in the electoral roll in 1802, as the owner occupier of a freehold house in Limehouse. The 1802 election was the first to be held after the formation of the United Kingdom of Great Britain and Ireland. The new Parliament was summoned to meet on 31 August 1802.

I suspect further research will prove him to be quite a substantial property owner in London and the East End.

According to a copy of the entries in a family bible they had the following children.

As with quite a few family documents, it is useful but not entirely accurate. Charlotte’s dates are slightly wrong, and initially it led me to assume that only Alfred, and Frances had survived to adulthood. In fact all, but the elder John Roger, and Edmund did, and I’ll come back to them in other posts

Roger and Charlotte can first be traced to London in 1851 living in a shared house in Mile End at 1 Saville Place (Mile End Old Town, Trinity parish, Tower Hamlets)with Mary Grace, a 66 year old widow from Limerick, and two of her grandsons who are teenagers. Roger Purssell is 67, and listed as a retired baker born in Limehouse.  Charlotte aged 61 also gives her place of birth as Limehouse.

The neighbours include a beer seller next door at no.2, a greengrocer and his wife, and a jailor at no.3. and a blacksmith/bell hanger at no 5.

There is no trace of them in the 1861 census, and Roger certainly died that year, so may well have died before the census was taken on the 7th April. Charlotte reappears in 1871 at 350 Mile End Road, as an 81 year old widow living on independent means, with a  16 year old servant girl, Mary Isacs.

By 1871, Alfred has re-married, to Ellen Ware, in Exeter in 1865, as a 34 year old widower with a daughter. Charlotte Purssell Jnr has died in London in 1869 at Alf’s house. James is in New York. William is dead. Joe is in Australia. There is no entry for John Roger Purssell in either the 1871, or 1881 censuses, and he appears to have also gone to Australia, though he returns by 1891.

It is mildly curious that she isn’t living in Alfred’s house in 49 Finsbury Square, but then again, as he has five children under the age of six living at home, and two housemaids, two nurses, and a cook living there perhaps she just wanted to live somewhere quieter in the East End.