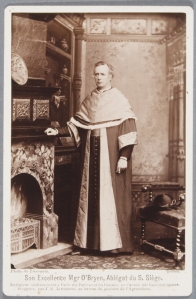 Mgr. O’Bryen is the type of the Roman prelate, tall, distinguished in manner, with fine intellectual head, He wears gold glasses and was arrayed in the magnificent silk scarlet habit with a folded cloaking over the left shoulder, which is worn by the supernumeray chamberlains of the Court of Rome on occasion of state. After the decree was read the Ablegate stepped forward again and read a triple address to his Eminence. The Latin address was delivered with a thorough Italian accent and pronunciation, so much so that one might have fancied he heard the reading of an indult [a licence granted by the Pope authorizing an act that the common law of the Church does not sanction.] in the Sistine chapel. The French was well read, but with a slight English accent. The English address made an eloquent allusion to the union of French and Irish in the cultivation of their faith in Canada.