Charles Joseph Penn (1814 -1884) is the father of Charles Penn Jnr, b.1848, and grandfather of Esther Penn,b.1872. He died in 1884 of “apoplexy”, in Newington Workhouse. He seems to have been admitted to the Workhouse in Westmorland Road on Wednesday 2nd January 1884, some time after lunchtime because his admission record shows the next meal is supper. At that date the workhouse also acted as a hospital, and a number of London hospitals are still in the original Victorian workhouse buildings – Hammersmith springs to mind – beautifully placed next to Wormwood Scrubs prison. 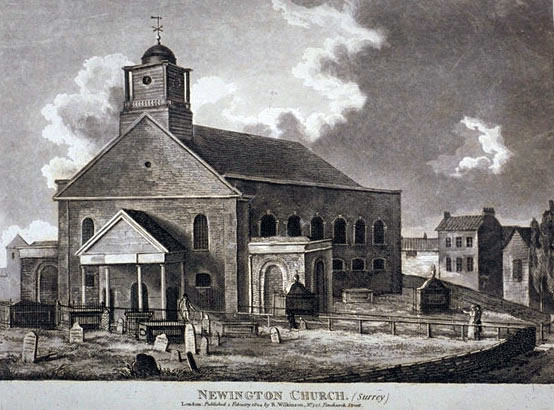 He was born in about 1814 in Keston, which was a suburb of Bromley, in Kent, at that time a village on the fringes of London; with his parents recorded as Richard and Susan Penn. He married Ellen Wilmott Miles(1831-1896) on the 13th October,1846 at St Mary’s, Newington. Ellen appears to be about 16, and he appears to be 30. She is explicitly referred to as a minor on the marriage licence.

Ellen’s father, Robert Miles (1798 -1844) had died in 1844, aged forty six. Her mother Jane (nee Corney) died in 1832, about a year after Ellen’s birth. Rob remarried on the 26th Jun 1837 to another Jane – this time to Jane Lowe at St Mary’s, Lambeth. So by the time Ellen was fourteen, both her parents were dead, and her closest relative was probably a step-mother.

Robert Miles also had the distinction of having been transported to Australia in 1818, and then returned to London by 1826, when he married Ellen’s mother in Tottenham. By 1841, he seems to be fairly respectable, and working as a mill-wright.

I’m not entirely sure how I feel about this marriage. The age difference between the two is pretty stark. Charles is close to twice Ellen’s age, and whilst a fourteen year age gap is considerably less extreme than some others, she is a teenage girl, and he is a thirty year old man. But there are any number of possibilities, it could be love, it could be predatory, it could be protective, or it could be practical. At the moment I’m not sure it’s bad, but it’s maybe iffy.

By 1851, Charles and Ellen are living at 5 Victory Place, in Newington, South London. It’s a fairly rough part of south-east London, off Elephant and Castle, and the New Kent Road. Later on in the century, Charles Booth classified it as poor, and ” tenanted by labourers, and car-men, always shifting”, and noted ” 2 brothels here – windows dirty, blind half down, pinned up, everything dingy and dirty”. So a tough area on the edges of the London docks. Charles and Ellen are bringing up their first two children, Charles Junior, who is three, and one year old Elizabeth

Charles Senior is thirty five and working as a  gardener, a job he continues right up to his death aged seventy. Ellen is twenty, and a mother of two toddlers.

Chas and Ellen live at 5 Victory Place for the best part of twenty years, and have twelve children over twenty five years. When they start Charles is thirty four, and Ellen is eighteen; by the time Harriet, the youngest is born, Ellen is forty three, and Chas is almost sixty.

By 1861, they are still at 5 Victory Place, with Charles still working as a gardener. The family has grown to three boys, and three girls ranging in aged from thirteen year old Charles Junior to two year old Sarah. Charles is now forty seven, and Ellen is twenty nine.

Ten years later, in 1871, the eldest two children Charles Junior, and Elizabeth have moved out. In fact, Charles marries some time in the first three months of 1871, shortly after the birth of his first child, Amy, who was born on the 15th December  the previous year. Esther was born about a year later in February 1872.

Charles Senior, and Ellen are still in Newington, in South London. The address is unclear, and, rather improbably, seems to be Little Lane Street. They have had four more children;  John, and Ellen who were born in 1862, followed by Mary Ann in 1868, and then two years later by William in 1870. Eighteen year old Joe is working as a coal and sand seller, and fourteen year old Richard is  an errand boy.

In 1881, the majority of the family have moved out and Charles Senior, and Ellen are living at 9 Eltham Street, Newington, with the three youngest children.  Mary Ann is fourteen, William is eleven, and Harriet the youngest is only eight, fifty nine years younger than her father. Charles senior lives another two and a half years before dying in January  1884.