This is from ‘The Herald of Peace’, Volume 8 published By Hamilton Adams & Co, 33 Paternoster Row, London 1832.It was a monthly journal founded in 1819, published by the London Peace Society (technically The Society for the Promotion of Permanent and Universal Peace, founded in June 1816.) The members were largely Protestant non-conformists, with a high proportion of Quakers. They advocated a gradual, proportionate, and simultaneous disarmament of all nations and the principle of arbitration.  For reasons that will become clear, this letter was published on p.508. 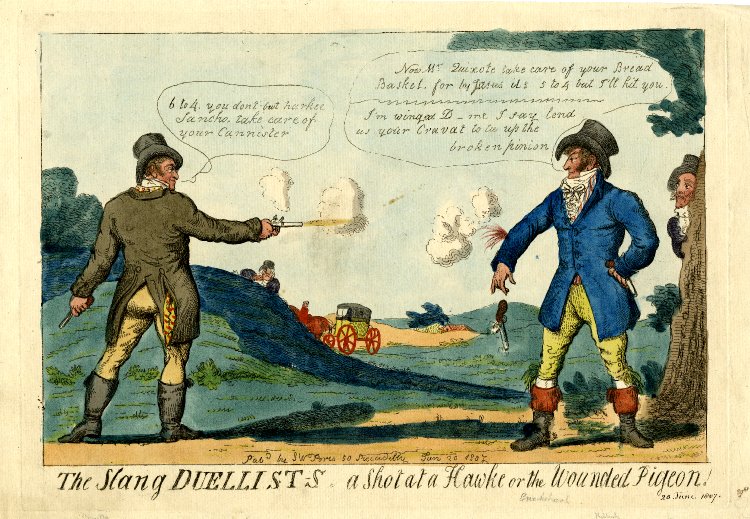 [From the Christian Advocate.]

Observing in your last, that you express a hope that the barbarous and wicked practice of duelling was on the decline, I regret to say that last week two duels took place in this neighbourhood, both arising from real or fancied offensive expressions that were uttered in the speech of the candidate for the northern division of the county of Durham. The first was between Mr Braddyll, the candidate for the county, and Mr Bowlby, a solicitor, and an intended candidate for the representation of South Shields, at some future opportunity. These parties fired, each once, and then thought fit, rather than murder each other to do what is called apologizing. The second duel was between the same Mr Braddyll, and Sir Hedworth Williamson, another candidate for the north division of the county. These parties, not content with one chance of going unbidden before their final Judge, fired a second time, again without effect, and then agreed, by apology, to let each other live a little longer.

Are such men as these, who break the laws both of God and man, fit to be sent as the legislators of the country ? Let the country from end to end respond, No ! and give not one vote to any man that will be guilty of intending murder. I am happy to say, that several of the electors, resident in this place, have determined not to vote for either of the above candidates, to mark their abhorrence of the practice.

In all the duels reported, two in one day is impressive. So Tom Braddyl is either unlucky, incredibly thin-skinned, or another “man with a fork in a world of soup.” to use Noel Gallagher’s memorable phrase. I particularly like the slightly high-pitched tone of the final sentence saying “several electors” won’t vote for either man to show their “abhorrence”. A bit like the Skibbereen Eagle’s editorial in 1898: “We will still keep our eye on the Emperor of Russia.”  There’s a bit more context below.

Local Papers.September 27, 1832.About seven o clock on the morning, a duel took place in Offerton lane, near Herrington, Durham, between Mr Russell Bowlby, a candidate for South Shields, and Mr Braddyll, a candidate for the northern division of that county. The same day, soon after twelve o clock, another hostile meeting took place, at the sign of the Hare and Hounds, on the Sedgefield road, between Sir Hedworth Williamson, bart., and Mr Braddyll, rival candidates for the northern division of the county. These duels arose out of expressions purporting to have been used in the speeches of the parties against each other. – Ibid. fromThe Local Historian’s Table Book: Of Remarkable Occurrences connected with the counties of Newcastle-upon-Tyne, Northumberland, and Durham. MDCCCXLIII

Colonel Thomas Braddyll (1776–1862) was a Lieutenant Colonel in the Coldstream Guards, and High Sheriff of Lancashire in 1821. His father had been a Tory M.P. In 1818, he inherited the family seat, Conishead Priory, Lancashire, and had it rebuilt by Philip Wyatt at a cost of £140,000.[present day value £160m.] The remainder of his fortune was lost to speculation in the Durham coal mines and in 1848 he was declared bankrupt. In a very pleasing twist of fate, the house was bought by the Durham Miners Welfare Committee for £35,000,[present day value £10.7m.] who used it as a convalescent  home.