The second half of the C19th seemed to spawn quite a flourishing industry in genealogy, both as a matter of research, and record, i.e. Burke’s Peerage, Burke’s Landed Gentry etc, as well as privately published family histories. There are quite a number of them, almost always complied and written by men. The quality varies hugely, some are well researched, and provide additional information to respectable sources such as Burke, or John O’Hart. Others range from the camp, and preposterous [Skeffington Gibbon] to meticulously compiled from written Quaker records [Norman Penney]. 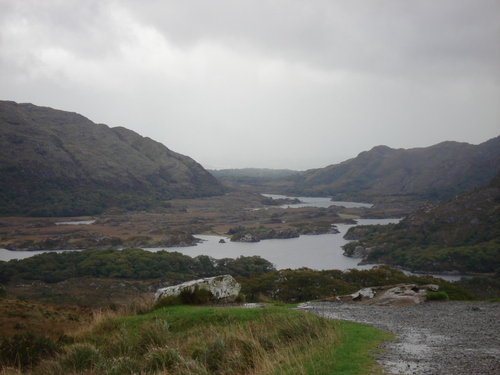 The following is extracted from

“ Some Account of the early history and genealogy with pedigrees from 1330 unbroken to the present time of the families of Hoar and Hoare with all their branches: interspersed throughout with anecdotes and incidents in the lives of the principal persons mentioned.” Complied by Edward Hoare. Esq. Late Captain of the North Cork Rifles, and of Factory Hill, County of Cork.  London, Alfred Russell Smith, 36 Soho Square. 1883.

The book itself is incredibly hard work because Edward Hoare provides the information, and anecdotes, under each individual, but links them via a family tree structure that is spread over 94 pages. It means you quite often find three generations of different branches of the family on the same page, and it requires going backwards and forwards to see how people are related.

Edward Hoare’s book falls somewhere in the middle of the range from camp to meticulous. He definitely has an axe to grind, and some scores to settle. He is incredibly keen to prove his noble lineage “I am entitled to quarter over one hundred coats of arms” etc, fairly disapproving of his grandfather, keen to mention two [rather distant] earls in the family, he’s the great, great, great grandson of one, and the great, great, great nephew of another, who is a complete wrong’un. He also absolutely hates his brother, and to quote Tom Leher on Oedipus “he really loved his mother.” Finally, he is remarkably anti-Catholic. An example of which are his comments on his third cousin, John William Deane Hoare: ” In Holy Orders. Curate of Saint Alban’s Church, Rochdale, in Lancashire; afterwards Vicar of Saint Philip’s Church, Sydenham, Kent. Has lately become a Roman Catholic, and a Priest of that Popish and idolatrous Church ! So much for High Church and Ritualism, with perhaps the blood of the “Donoghues ” in addition.”. The Donoghues were John William’s mother’s family, and give every impression of being a fairly respectable family. JW’s father was the [Church of Ireland] Dean of Waterford, and his mother was buried in Waterford Cathedral.

To place him in the story, this Edward Hoare is a second cousin, once removed of Louisa Grace O’Bryen [neé Hoare, a great-aunt x3, who married Rev. Hewitt O’Bryen.] He is also the 1st cousin 2x removed by marriage of Olivia Guinness [daughter of Arthur]. She [Olivia] is Louisa O’Bryen’s aunt. Finally, John William Deane Hoare is Louisa O’Bryen’s nephew.

Over to Captain Hoare:

Edward Hoare [Capt. Hoare’s grandfather] of Factory Hill, county of Cork.: Baptized at Saint Peter’s Church, Cork, 18th May 1751. In the 13th regiment of Light Dragoons; Cornet 16th August 1770; Lieutenant 12th  December 1771; and Captain 16th August 1778; was afterwards Captain in the North Cork County Militia, and engaged in all the encounters with the rebels in 1798 in the county of Wexford, where the regiment lost 60 officers and 106 men; was J. P. for the counties of Leitrim and Roscommon, 28th May 1795, also for the county of Cork; was Deputy-Governor for the county of Cork 20th November 1807. He died at Cullen’s Wood, near Dublin, 22nd Sept. 1831, at the house of his son-in-law, Robert Newenham, aged over 80 years, and is buried at the Moravian Burial Ground, near Dublin, where his wife is also buried. Had 19 children, all christened and baptized, none being twins, but who mostly died young. He spent over £20,000 while in the 13th Light Dragoons, and ruined the property.

He married Martha Tyrrell,daughter of Edward Tyrrell,Esq., of Tyrrelstown, near Gort, county of Galway. Died at Dunville, near Dublin, 20th March 1823, aged over 60 years.

Joined with his father in his debts, cut off the entails, and sold two portions of the estates to Colonel Gribbings and Warren Hastings Jackson, Esq., in the year 1814. Married, by his cousin, the Reverend Edward Henry Hoare of Limerick, who was also trustee of his marriage settlement, on 15th December 1806, at Saint Anne’s Church, Dublin, to Sophia Barry, second and youngest daughter and coheiress of Robert Barry, Esq., third and youngest son of Sir Edward Barry, first Baronet, Physician and Surgeon- General to the Forces in Ireland (who was M.P. for Charleville borough, county of Cork, 12th March 1743).

Robert Barry was a Barrister-at-Law and King’s Counsel, of Hume Street and Merrion Street, Dublin, and of Dalkey, county of Dublin. He was also M.P. for the borough of Charleville, in the county of Cork, 24th April 1761 and 12th July 1768. His first wife was Elizabeth Lyons, eldest daughter and coheiress of Henry Lyons, Esq., of River Lyons in the King’s county, M.P. for that county for a long series of years, and J. P. and Deputy Governor, and who [Henry Lyons] married Anna Rochfort, [these two are Capt. Hoare’s great, great grandparents] youngest daughter of George Rochfort, Esq., of Gaulstown, in the county of Westmeath, M.P. for that county (by his wife the Lady Elizabeth Moore, daughter of Henry Moore, third Earl of Drogheda), and sister of Robert Rochfort, first Earl of Belvedere. [Robert Rochfort accused his wife of adultery with his brother Arthur. Arthur was tried for criminal conversation and fined £2,000. Robert kept Mary locked up in Gaulstown House for the remainder of his life. Mary was locked in a room, and apparently, only released for brief periods and not allowed to converse with the staff or even her children. She also had to apply to Robert for permission to walk the grounds. If she was granted permission after declaring the route,  a footman was employed to travel the route ahead, whilst ringing a bell and calling out obscenities about her.]  [Not necessarily a great, great, great uncle one would proudly mention]  Robert Barry married secondly Elizabeth Guillelmine La Touche, only daughter of James Digues La Touche, Esq., of Bellevue, county of Wicklow, but by her had no issue.

Sophia Hoare, my dearest mother (by whom and by her mother also, both coheiresses, I am entitled to quarter over one hundred coats of arms, among them the Royal Arms of the House of Plantagenet). died at Factory Hill 5th March 1823, and was buried at Rathcooney churchyard on the 8th of the same month. She was the best of Mothers and of women; to her, and her alone, I owe everything; and during life I have ever cherished her memory with the purest affection, love, and gratitude.

Edward Hoare. Born at Number 92 (former number) the Grand Parade, Cork city, 29th October 1807. Privately baptized by the Reverend Thomas Newenham. his father’s first cousin. Educated at Trinity College, Dublin. In the North Cork County Rifle Regiment of Militia; Lieutenant 19th January 1846; Captain 11th January 1855. Served with the regiment for over five years on embodied service : retired 21th August 1864. Author of a volume of Poems entitled ‘ Solitary Moments(London : Longmans, 1840). [Available in Google Books, and very basic traditional rhyming poetry] Also of several Antiquarian and Numismatic Works. Is a member of a large number of Literary and Antiquarian Societies, and a contributor to several of the periodicals of the day. The collector and compiler of this volume and Genealogy of the family. Unmarried.

William Barry Hoare. Born at Limerick 14th March 1810. Is a Solicitor and Attorney ; now of Moneens, near Bandon, : in the county of Cork; formerly of Monkstown, county of Cork. The history of the life and career of this exquisite and interesting specimen of humanity is in preparation, far advanced towards completion, and will be shortly published, as a guide and caution to posterity. In the mean time parties interested are requested to examine the Prerogative Office for Wills, Dublin; the Deeds Registry Office ; and the Proceedings of the Irish Court of Chancery, “Hoare v. Hoare,” 1854, 1855, and 1856, for the means and artifices used by this pink of propriety ? fraternity ? honour ? and integrity ? ! ! !  [One can only assume from this that Capt. Hoare felt cheated out of an assumed inheritance. Certainly his brother was wealthy,  owning 2,815 acres in county Cork in the 1870’s.]

Married, first, at Glanmire Church, county of Cork, on Easter Tuesday, 28th Mar 1837, Mary Anne Pratt, only child of John Pratt. Esq., of Woburn Place, Cork. She died at Monkstown 30th August 1872. Buried at Douglas churchyard. near Cork. She was 54 years of age. Had issue three sons and three daughters.

Married, secondly, on the 7th August, 1877, at Saint Stephen’s Church, Dublin. Man Anne Hawkes, second wife and widow of Zechariah Cornock Hawkes of Moneens, near Bandon, county of Cork, and daughter of John Hawkes Harris of Cork. She was the aunt-in-law of his first wife (Mary Anne Pratt, whose mother was sister of Z. C. Hawkes), and therefore she is now grand-aunt and stepmother to W. B. Hoare’s daughters.

Talk of a deceased wife’s sister’s connection ! What is it compared with this hitherto unheard-of alliance ? There has been no issue by this second marriage. The Lord be praised! If there had been, it would have been a puzzle for genealogists to describe the relationships ! ! !

The slightly curious reference “stepmother to W. B. Hoare’s daughters” is mainly due to the fact when the book was written only two of William Barry Hoare’s children were still living. Two sons and a daughter had died young, and the eldest son, another Edward Hoare (1838-1870), a Captain in the 5th Regiment of Foot, the Northumberland Fusiliers had committed suicide on the passage from India, by leaping from the cabin window of the ship into the sea, on the 4th January 1870.  Both the girls, Frances and Sophia, married soldiers, and both Algernon St. Leger Burrowes, Frances’ husband and  Herbert St. George Schomberg, Sophia’s husband ended up as Lieutenant Colonels in the Royal Marines.